A project recently put into motion in the Philippines is making use of old used plastic bottles to light up homes in shanty towns across the archipelago. By filling the bottle with bleached water and fitting them into the roofs of the shacks, they can refract the equivalent of a 55W built into a dark room using external sunlight. While this does not offer a solution for when the sun goes down, it does provide lighting within dark homes so families can work and study during the day rather than have to spend time outside. In addition the recycled bottle light does not emit any heat and only cost about $1 to make. The solar light bulb is an economical solution that can be applied to schools, factories, and workshops in rural areas.


Around 25,000 low-income homes in the Philippines have been lit up after the launch of a scheme to fit sunlight-powered "bulbs" made from old plastic bottles.
In a country where 40% of the population lives off less than $2 a day, the rising cost of power leaves many unable to afford electricity. Some use candles as a light source, but when generations of family members share a small, dark space in shanty towns, accidental and destructive fires are often the result.

The Liter of Light project was launched six months ago by the My Shelter Foundation, a Philippines-based NGO which aims to provide light to 1 million of the roughly 12 million homes who are either still without light or live on the threshold of having their electricity shut down.
The scheme uses plastic bottles filled with a solution of bleached water, installed into holes made in shanty towns' corrugated iron roofs, which then refracts the equivalent of 55W of sunlight into the room – during the day, at least. It takes five minutes to make, and using a hammer, rivet, metal sheets, sandpaper and epoxy, it costs $1 to produce.
Eduardo Carillo, a resident in one of Metro Manila's many impoverished areas, said: "Before we had the bottle light, the walkways to our house were so dark and going inside made it even darker. The children are no longer scared – they are happy now and they laugh because they can play inside during the day instead of playing in the streets."
The idea of using plastic bottles as a light source is not a new one - it was developed in Brazil by Alfredo Moser in 2002. But with the help of a group of MIT students, the solar bulb used in the Philippines has been modified to meet local needs.
My Shelter Foundation Founder and social entrepreneur Ilac Diaz explains: "We basically did a cheap kind of one-way lock using the metal sheet. Once you put in the bottle, it will not slip down anymore. That way even if the roof expanded or contracted with the heat, it would not affect the waterproofing and would keep the bottle intact for many years to com."
Diaz believes in the importance of using "appropriate" green technologies for poorer countries:
"The challenge is how can the developing world come up with its own model to limit emissions of carbon- we cant afford to buy imported, patented or manufactured solutions from the developed world and can't afford to wait until they become affordable."
The programme is also creating jobs. What began with teaching and contracting one unemployed man to make the first 1000 bottles has evolved into an ongoing program that has creating more than 20 jobs in installing the bottles. "We wanted to prove one man could change his village," said Diaz..

Source: The Guardian
Posted by PAT - Manufacturing Solutions at 8:50 PM No comments:

Best wished form ALL of us at PanAsia. 2011 was a great year and we look forward to making new friends and opening new markets with you in 2012. Thanks for the continued support and wishing you all the best in the coming year. 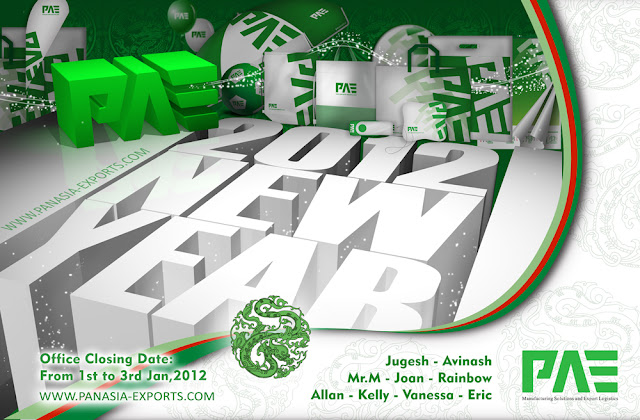 Posted by PAT - Manufacturing Solutions at 9:24 PM No comments: